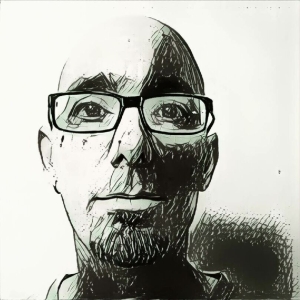 Here are the essentials:

I was born in November of 1971, just two days after the release of Led Zeppelin 4, in a city called Ashkelon in the south of Israel.

As childhoods go, I’ve had a very good one. No silver spoon in my mouth, but no stories of misery or hunger, thanks to my beloved parents, Moshe (May he rest in peace) and Dalia (May she live long and prosper). I have a brother and a sister, both of whom I love.

I dare say, I had it pretty darn good.

When I was a young boy I was a skilled story teller (read: teller of fibs) and no better stories existed than those I told myself. I wanted to be a football player (Soccer for the American reader), but when I learned that it requires talent, physical fitness and commitment, and in parallel to finding a guitar, I decided I should be a DJ on the radio. Or a rock star. Whatever came first.

I didn’t have time for books until I had my first run-in with my commander which gave me some time to reflect about some things. I had a book, given to me by a good friend (Robert Silverberg’s “The man in the maze”) so this reflection resulted in me, finally figuring out what I missed for all these years.

I wrote since I was 13 years old. My drawers, such as they were, were always full of semi juvenile poetry, some raw, politically infused ramblings, and even a few satirical pieces. All of the aforementioned were full of burning youthful emotions and so much room for artistic development.

I studied software engineering and was even lucky enough to be hired pretty early by a big company, for which I work to this day. It gave me the chance to see the world in a very different way, and to meet some really important people, without whom I would’ve still be writing very heartfelt words, none of which would result in a finished book.

But who am I? I am just a guy, happily married to a beautiful wife and father of 4 amazing children. I guess not much have changed. I still have it pretty darn good.

I was raised in a couple of farming communities in the south of Israel, and since 2001 have lived in different places, including Ottawa and Toronto in Canada, Alpharetta in Georgia USA and as I write these words, Zapopan, Jalisco in the great country of Mexico. I’m so grateful for these priceless opportunities to gain so much perspective and meet some really good people.

I love music, mainly classic rock and other related genres. I love sports, soccer being the first I was exposed to and to this day, I follow the teams I support and write about the beautiful sport in my free time. I fell in love with Hockey while living in Ottawa, so it won’t be very difficult to figure out who I support in the NHL. I am also a big Mixed Martial Arts enthusiast and write about the topic quite often.

I used to be involved in passionate political debates, but have long since decided that it is a hindrance. Instead I focus on the human and individual levels. I find that talking to a person, rather than a party line, or a nationality, is much better and helps bring down some of these artificial barriers that separate us as human beings.